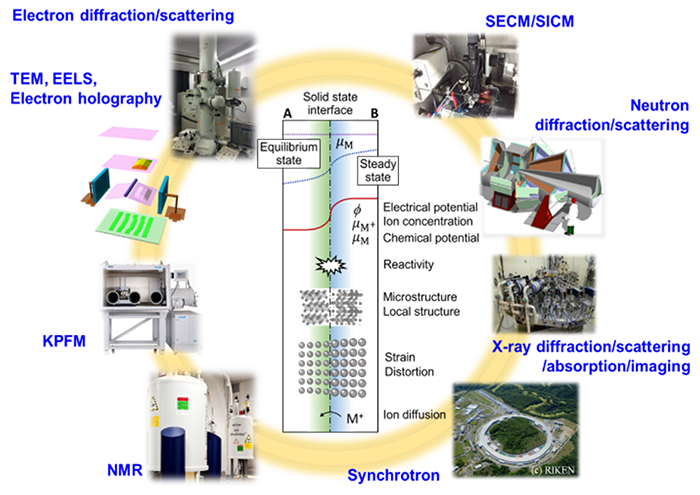 To construct a theory for “Interface IONICS,” Gp-A03 introduces two strategies: computational and data science approaches. For the former, equilibrium/steady states and dynamics of electrons and ions around solid-solid interfaces are investigated using multiscale computational approaches through DFT (density functional theory) level calculations and continuum models. In addition, data-driven AI science approaches are implemented to elucidate large-scale structure-property relations in the observed images and spectra. Through these findings and deep collaborations with the other groups (A01, A02, and A04), a new theoretical framework for “Interface IONICS” is established. 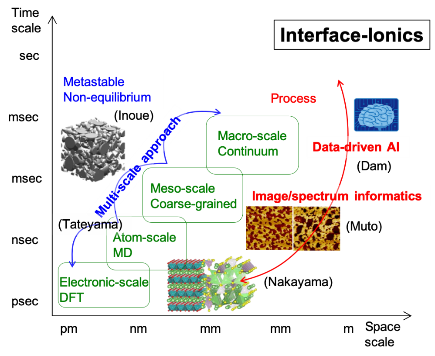 Schematic picture of the A03 approaches

Gp-A04 studies solid-state ionics materials and realizes new functionalities through interface engineering. For instance, charge accumulation and migration of charge carriers are highly dependent on the interface structures of materials. Nevertheless, the origin is not clearly understood. One example of an electrode material for lithium storage is LiMnO2. Although LiMnO2 prepared by a conventional route shows an insufficient ability for charge accumulation, LiMnO2 with enriched grain boundaries shows a much better functionality as an electrode material. Gp-A04 establishes the basic science related to the interface structures of solid-state ionics materials, which will be the foundation for innovative solid-state energy storage systems and other functional solid-state devices.